The hospital was built in 1887 as a direct result of a most generous benefactor Mrs Margaret Adams. She and her husband Richard Dering Adams, a surgeon, came to live in Hawkhurst, sometime in the middle of the century. Mr Adams, the son of a farmer, was from East Farleigh and his wife belonged to a Hastings family. They lived in a substantial house, Springfield, on the north side of the High Street, which still exists. Mr Adams died aged 47 in 1866. They had no children and Mrs Adams continued to live in Springfield until her death in 1887, although she seems to have spent part of her time in another house which she owned in St Leonard’s.

In 1874 she began the project which still benefits us all – the provision of a hospital for the village. Her first move was to buy The Bull Inn, which had become available on the retirement of the landlord. Mrs Adams’ intention was to convert this building into a hospital and she commissioned an architect, Mr Albert Smith, to advise how this should be done. He reported that it would be better to demolish the existing structure and to build a completely new hospital, which he thought would cost about £550. Mrs Adams accepted this advice.

A Trust had already been set up by Mrs Adams to carry out the project and to administer the hospital when established. The majority of the trustees appointed by her now thought a more central site should be sought. Mrs Adams did not approve.        She wrote “….I 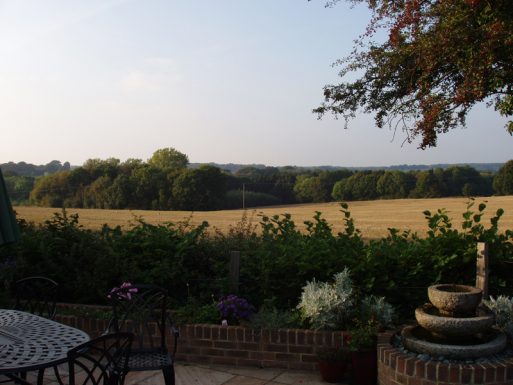 should be sorry to prevent the hospital being placed in a more eligible site, if it should be procured, but at the same time my decided preference is for it to remain on the present site, which is so elevated and healthy, with pure air and extensive prospect so conducive to the restoration of health and strength.” Most of the trustees did not agree and continued to look round for alternative sites. However, Mrs Adams’ opinion eventually prevailed. The Bull Inn was pulled down and the hospital was built where it had been. A matron was engaged and the Hospital opened its doors in the summer of 1877. An endowment fund was set up to which a number of people contributed, by far the largest contribution coming from Mrs Adams who had already paid for the site and the building.

The Hospital continued in its original form as set up by Mrs Adams until it became a NHS hospital in 1948. Since then it has on several occasions been altered and enlarge with substantial financial help from the Hospital’s League of Friends.

Reproduced by kind permission of Mr Alan Vaughan, past Chairman and Vice-President of the League of Friends

The League of Friends

The League of Friends was formed in May 1967 under the chairmanship of Mr Richard (‘Dick’) Thompson in order to promote organised fund raising. The constitution was adopted on 15 May 1967 and amended on 30 April 1992 and again on 23 April 2009.

Since its formation the League has completed many projects in support of the health and well being of the Community and in 2010 we opened The Green Shop on the Colonnade which has proved a great success.

Since opening the Green Shop, we have managed to purchase Cryotherapy equipment which is kept at North Ridge Surgery, an Automated External Defibrillator for the Hawkhurst Community, First Responder Team and a Bath Hoist for the hospital.

More recently we are sponsoring Music Sessions led by Kate Foy and her flute. The District Nurses of Cranbrook and Hawkhurst work on site now and are no longer without vital equipment of which they need.

The Trustees are delighted that we are able to make a positive contribution to both the Hospital and health of our local community, which includes the surrounding villages.